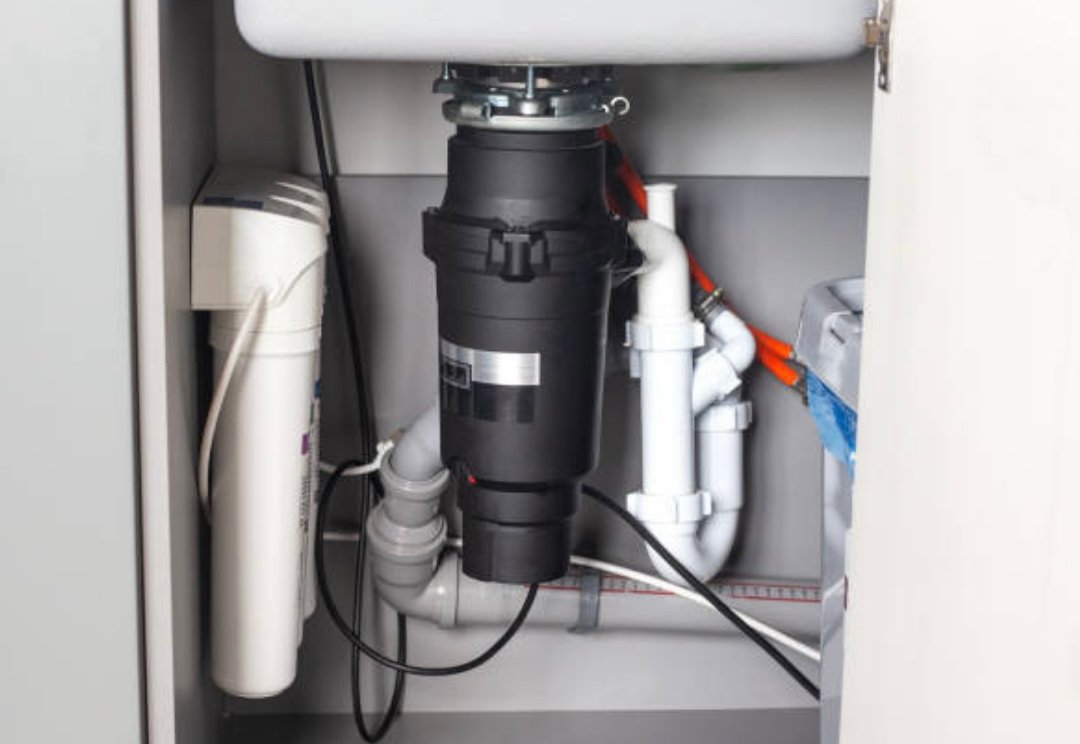 Despite its efficiency, the garbage disposal is arguably one of the most overlooked appliances in many homes. You probably don’t think about it until it breaks down. When it does, it’s a headache!

Garbage disposals can become stuck when a bone or other hard object gets caught between the disposal’s wall and the internal impeller blades. When it jams at first, the motor will continue to hum as it struggles against the foreign object, clogging the impeller plate. As the motor warms up, the automatic shutdown mechanism included in almost all modern disposals will turn it off altogether.

How to Know When Your Disposal is Stuck (Jammed)

Regardless of how diligent you are with even the best garbage disposal, sooner or later it may get stuck. You’ll know you’ve got a jammed disposal when:

The disposal hums, but no actual chopping or grinding is going on. This usually means that something is caught under the blades and is stopping the actual motion of the disposal.

The blades are overly noisy as they cut and dispose of the food. There is probably a piece of metal, glass, or other foreign objects present that the blades are trying unsuccessfully to grind up.

The machine starts working and then suddenly stops. More than likely, the disposal overheated and shut itself off.

What Are the Ways to Unstick/Unjam My Garbage Disposal?

There are four ways to unjam a garbage disposal. You unstick it by resetting it, rotating the disposal blades, manually removing the blockages, or clearing the debris. Keep reading to learn how to go about each disposal unsticking method.

Pull the plug out of the outlet to ensure that the disposal unit doesn’t activate while you work on it.

Press the reset button on the disposal’s underside

The reset button or thermal overload button is at the bottom of the garbage disposal. Crawl under it and look for a red button. If it looks like it’s sticking out, push it back into the unit. However, some brands like Waste King have the reset button under a hollow part in front.

This may fix the jam right away. If the reset button isn’t sticking out, check for other methods that involve manually rotating the grinders to clear the blockage. Keep the unit unplugged.

Wait 15 minutes if the button pops out again

The red button pops out when the garbage disposal overheats. Give it time to cool down, then press the button again. Repeat this until the button stays in place. If the button still doesn’t stay in place, switch to a different method.

Run cold water in the sink

Turn on the faucet. Check to make sure the water is cold, then let it run into the drain and through the disposal for a minute or two.

Plug the unit back in and make sure that it’s turned on. The reset button should stay in place as the disposal blades begin spinning again. If they’re still stuck, listen for the motor humming, which indicates that the device is functional other than the jammed grinders.

If the unit isn’t humming and the breaker is working, it is probably broken and needs to be replaced.

Insert an Allen wrench into the hole underneath the disposal

Unplug the unit and go under the sink to find the hole on the disposal’s underside. It is typically hexagonal-shaped and in the center. Get the hexagonal wrench that came with the disposal unit and insert it in the hole.

If your disposal did not come with a wrench, you can get one from Mulwark Store on Amazon or any home improvement store.

Crank the wrench to turn the disposal’s motor shaft

First, turn the wrench counterclockwise as far as you can. Then turn it clockwise until it won’t go any further. Continue cranking the wrench back and forth until you can rotate it completely in a circle.

It’s okay to apply force while doing this. The wrench is designed to bend a little and won’t damage the disposal unit.

Run cold water into the sink and test the disposal unit

If the unit doesn’t work or you were unable to rotate it, unplug the unit, drain the water, and try a different method.

Turn off the room’s electrical supply

To turn off the electricity, go to the fuse box in your home. It is usually on the bottom floor or in the basement. Find the switch that corresponds to the particular kitchen and flip the switch off.

The switches should be labeled, but you can test the room for an electrical current by plugging something into a wall outlet and attempting to turn it on.

Another way to do this is to flip the light switch near the disposal unit. This only works if the switch controls the electrical outlet where the unit is plugged into. Check by listening to the unit for humming.

Look down through the sink drain for any blockages

Get a flashlight and flash it into the sink drain and garbage disposal. Focus the light on the unit’s outer edge, since this is where blockages typically happen. Find the small teeth of the disposal’s blades on the outer edge and look for anything obstructing them.

Remove blockages with tongs or pliers

Instead of using the Allen wrench, get a garbage disposal wrench. It looks like a claw with two prongs and a wrench. Stick the prongs down the drain until they’re around the unit’s blades. Spin the blades counterclockwise, then clockwise, until they rotate freely.

Spinning the blades this way requires a lot of force. Keep turning the wrench back and forth until the blades rotate freely.

Remove the wrench and turn on the disposal

Pull the wrench out of the drain. Plug the unit into the outlet, then restore the electrical current to the room. Turn on the disposal to test run it. If the garbage disposal still doesn’t work after all these fixes, the motor might need to be replaced.

SEE: How to Unclog a Garbage Disposal

Use a pair of tongs to remove any large objects from the disposal. Always remember to never put your hands down a garbage disposal, even if it’s turned off.

Once the largest pieces of food and debris are removed, hit the reset button, turn the water on, and power on the disposal. It should start running smoothly immediately.

You might need to contact a professional plumber if the appliance does not work after trying all these unsticking methods.

How to Prevent Your Disposal from Getting Stuck

By following the correct guidelines for usage and performing a basic maintenance routine, you may avoid having to go through this process next time. You should

Put hard bits of food, such as little chicken bones, through it on a regular basis. When these materials are pulverized, the fragments of hard material scour the edges of the grinding chamber and eliminate buildup. This aids in the cleanliness of your waste disposal.

Let cold water run down the drain when using the garbage disposal. In general, disposals operate best when used in combination with cold water. In addition, the cold water helps to solidify oil and fat, making them simpler to drain through the system.

Fill your waste disposal with ice cubes once a month to clean it. This will aid in the removal of any grease or muck that has accumulated on the sides of the disposal.

Don’t overfill the waste disposal. Attempting to put too much food down the disposal at once can cause it to clog. Fill the disposal only halfway.

When you put food in the garbage disposal, make sure you run it right away. Don’t leave food sitting there for long. Food that stays in the disposal causes corrosion, so turn it on whenever you put food in it.

Non-food objects should be kept away from the garbage disposal. The most common method of damaging a garbage disposal is to drop cutlery, jewelry, or other valuables into it by accident.

Related: How to Clean a Garbage Disposal

How to Fix a Leaking Garbage Disposal

How to Dispose of Muriatic Acid