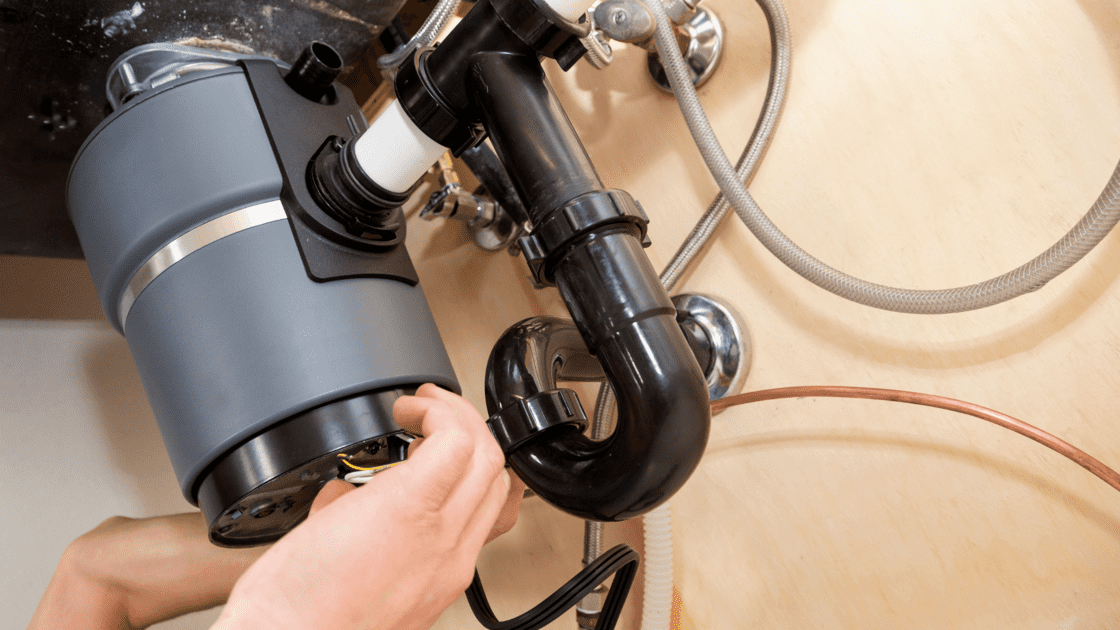 Garbage disposals are excellent for removing leftover food so the kitchen trash can doesn’t get clogged and stinky. You can tell there’s a problem when you turn on the garbage disposal, and all you hear is a loud hum or a metal-on-metal grinding sound. Luckily, replacing a garbage disposal is not difficult.

How Can I Replace My Garbage Disposal?

Before hiring a plumber to replace it, try fixing it yourself—an effortless DIY job for anybody with some experience with essential tools like pliers, screwdrivers, and putty. Before you go down beneath the kitchen sink, here’s what you should know.

1. Ensure that the disposal is truly broken.

Whenever a disposal stops working, it’s not always because it’s broken. There are two fixes to try out depending on how the machine is malfunctioning.

If you turn on the power and nothing occurs, examine the outlet, generally positioned beneath the sink, where the plug might become accidentally loosened when accessing supplies kept in this area. The built-in circuit may have tripped if the unit is safely plugged in. Find the little red button on the unit’s bottom and press it to reset the circuit. Turn on the garbage disposal; if it remains silent and motionless, it is time to replace it.

The odds of the disposal’s blades being stuck increase if the switch is flipped and the motor hums, but the blades don’t revolve. With a flashlight, peer down into the device. If you see a stray utensil, pit, peach, or other obstruction, or if there is a pile of fibrous waste, like celery, twisted around the blades, turn off the power to the device and remove the problematic object using a long fork or set of pliers.

Never put your fingers into a disposal because the blades are pretty sharp. Once the trash disposal has been cleaned, you can switch it on and try it out. If it still simply hums, it has to be replaced.

2. Save Money by Doing It Yourself.

You may purchase a new garbage disposal for as little as $50, but at that amount, you’ll likely only receive a tiny, ineffective appliance that will struggle to grind up anything more than the softest of waste.

At the upper end, for around $200, you can purchase a powerful, comparatively silent appliance made of stainless steel with a few years of warranty and, typically, an auto-reverse starter, which causes the blades to spin in one way before reversing to help prevent most clogs. For most people, a garbage disposal within the $75 to $100 price range provides the strength and durability to manage daily kitchen needs.

The absence of a plumber for the installation results in significant savings. The task typically takes a few hours and costs $100 per hour. However, remember that you will spend most of the installation time bending down to access the restricted space beneath your kitchen sink. If your back isn’t capable of enduring a protracted and painful stoop, it would be preferable to hire a professional.

You’ll need a new unit (here’s everything you should know about How to Choose a Garbage Disposal) and some essential equipment to repair a broken one. Although model-specific installation requirements might change, the following tools are often needed:

4. Turn off the Power Before You Begin.

Do not begin any electrical appliance repair or replacement work until the power has been turned off. Remove the garbage disposal’s stopper first (the outlet is most likely beneath the kitchen sink but may be mounted on the wall by the countertop).

Although the technique might vary based on the model being replaced and the current one, it is often a pretty simple operation. To collect water drips, clear the area beneath your sink and use an old towel to soak it up. To have enough light while working, position a flashlight in the appropriate location. Then, to prepare for installing a new disposal, follow the steps below to remove the old unit:

Unscrew the discharge tube—the stiff PVC or metal line that transports water and ground-up food waste from the garbage disposal into your home’s plumbing system—and gently tug it away from the unit.

Find the mounting ring at the top of the disposal. It is a thin steel ring with three extended grips. Take hold of the grips with one hand and turn the ring counterclockwise while holding the garbage disposal in place with the other. Be ready: The disposal will release once the fastening ring is removed, and these devices may weigh up to 15 pounds.

Remove the metal faceplate from the garbage disposal’s base by unscrewing it.

Unclip the two wires that link the disposal to your home’s electrical system after slipping the copper connecting wire out from under the green screw keeping it in place. To squeeze the clips, you might want to use your needle-nose pliers. Dispose of the outdated garbage disposal.

You should remove the old mounting bracket; you may have to unscrew it, but it usually just slides off.

To release it, raise the sink flange (the metal ring that covers the drain and garbage disposal outlet in your kitchen sink). If necessary, lightly tap it with a hammer. It may be taken out of the sink by lifting it and taking it out from the top.

Step out from beneath the sink and, while standing in front of it, use your putty knife to scrape away any residual putty around the drain.

SEE: How to Disconnect a Garbage Disposal

Apply plumber’s putty to the bottom of the new sink flange while positioned in front of the sink, and then push the flange into position so that its ring covers the drain opening. As the putty hardens, place something substantial on top of the flange to keep it in place, such as old garbage disposal.

You should slide your new mounting bracket into the rubber gasket included with your new trash disposal before being screwed under the sink.

Remove the metal faceplate from the new disposal’s bottom. To connect the appliance to your home’s electrical system, clip the electric cables to the new garbage disposal, connecting each wire to the color-coded nuts on the disposal. Then, secure the copper grounding wire beneath the green nut on the disposal’s bottom. It typically comes with a black and white or red and black wire.

Lift the new disposal onto the mounting ring, then rotate the ring counterclockwise until the garbage disposal snaps into place and is set.

Reattach the discharge tube and tighten the screws holding it in place. If your configuration has a dishwasher drain hose, reconnect it.

Turn on the water and remove the load from the flange. Look under the sink to ensure the new trash disposal isn’t dripping water. This is rarely an issue if you carefully secure every screw during installation.

Switch the circuit breaker back “On” and plug the new disposal in. The new device ought to start up and function without a hitch. Congratulations!

How a Garbage Disposal Works