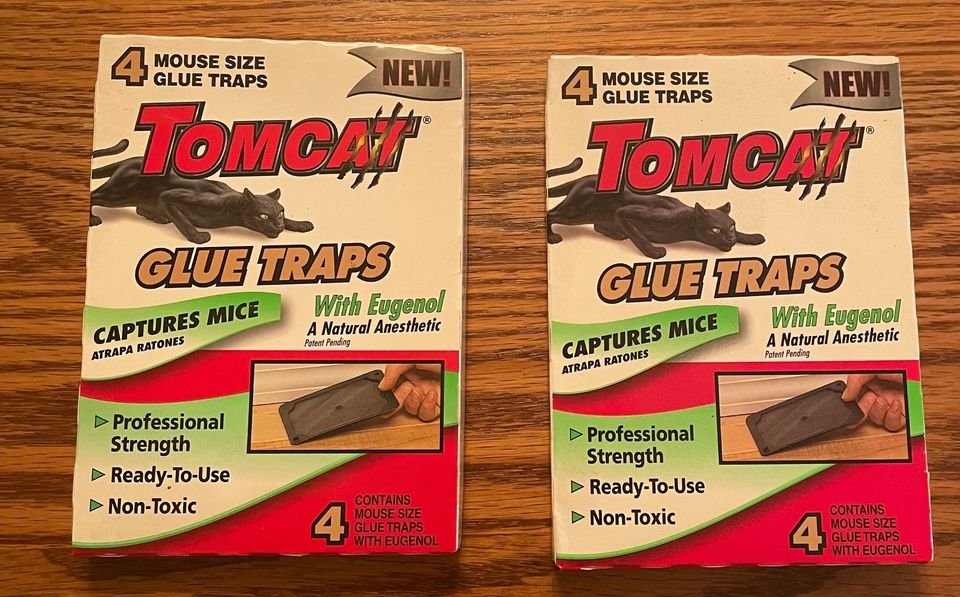 Having mice in our homes is a horrible experience. Even though they are small and seem to cause no harm, the little rodents are more trouble than expected. One of the easiest and most efficient ways to catch a mouse, among others, is by using a glue trap. If you are successful with the trap, you are responsible for getting rid of the mouse. This is a rather unpleasant task that many people do not like.

How Does a Glue Trap Work?

A glue trap is a small rectangular board filled with adhesive and used for capturing animals. Usually, a piece of food the animal would be attracted to is placed on the board. The glue trap is placed in strategic places where the animal might be. When the animal sees the food item, it reaches out to get it and, as a result, gets stuck on the board.

Animals caught in a glue trap are usually still alive but unable to move. This might be difficult because it’s harder to dispose of a live animal than a dead one.

How to Dispose of a Live Mouse Caught in My Glue Trap?

The first thing to remember is that you shouldn’t directly handle a mouse, dead or alive. If possible, you should stay away from anything that is directly involved with them. This is because they can transmit a lot of deadly diseases to humans.

There are many options to choose from when disposing of a live mouse in a glue trap. You can

Keep reading to learn how to go about any option you choose to employ.

There are no humane ways to kill a mouse, only less inhumane methods.

Many people do not like to choose the option of killing a mouse simply because they do not have the heart for it. There are many ways to kill a mouse. You can choose the hard practical way by whacking it several times with any hard object. This might be messy because of the blood, but it is an effective way of disposing of the mouse.

After it is dead, you can carefully carry it out and dispose of it in your garbage. Remember to use gloves for protection. Being a dead mouse does not protect you from the diseases it might carry.

You can poison it if you do not want to kill it by whacking. This takes a long time and can be dangerous because after you have disposed of the dead mouse, another animal might eat it and die of that poison. You can also drown or freeze it, but these methods require knowledge and a lot of guts.

If you have to kill a mouse, it is best to whack it to death and get rid of it. When the rat is lifeless, follow these steps to dispose of it safely:

SEE: How to Dispose of Dog Poop

You can choose to carefully take the glue trap with the mouse out of your house. You can drive to a comfortable distance and release it there. Releasing the mouse might be easier for you, but bear in mind that it’ll probably run into another person’s house and become a problem for them, or they’ll end up having a lot of pups, which will cause an infestation.

If you want to release the mouse, you should drive to your nearby dump and release it there instead of just leaving it randomly in environments you feel protected from. They are also locations that accept live rodents. You can drop off the captured mouse there.

Taking the rat to the vet is also a valid option—either the vet or a local animal shelter. The vet/animal shelter will take the matter into their own hands and ultimately decide what to do with it. It is most likely, though, that they will find a humane way of killing it.

Pest control is an option before using the glue trap and after. If you have a rodent infestation and do not know what else to do, it is best to call a professional pest control company to help with the job. They will catch the mouse and completely get rid of it without you being involved.

You can also call pest control after the rat has been caught and you don’t know how else to dispose of it. Being professionals in the business, they’ll know how to handle it.

SEE: 5 Ways to Get Rid Of Maggots in Trash Can

1. You shouldn’t forget to be well protected at all times when carrying a mouse or anything related to avoiding diseases.

2. Wash your hands afterward and sanitize them.

3. After getting rid of the mouse, ensure you properly clean your house to eliminate any contamination from the mouse.

4. If you have decided to release the mouse, do not just dump it anywhere away from your environment or residential areas.

5. As inhumane as it sounds, the best option for disposing of a mouse is killing it. Rodents are not able to survive in certain environments. They’re also exposed to danger and the risk of being eaten by other animals. They breed in large numbers and have a risk of infestation. They also carry around diseases that are deadly to human health.

Where Can a Live Mouse Be Released?

If your glue trap catches a rat, consider where the optimum locations are before setting it. They must find an uninhabited place at least two miles away from your house to prevent them from finding a path back.

But don’t let them go where they might become someone else’s problem. In light of this, refrain from releasing them close to residences, farms, establishments, parks, or abandoned structures. Find regions with an abundance of vegetation and cover instead.

What to Do with a Live Mouse in the Winter?

In the winter, there is no better way to get rid of a live mouse. You would either “humanely” kill it or put its chances of survival in grave danger by releasing it outside. It would still die in either case; there was no other option.

You would have to take care of the rat until spring if you don’t want to risk getting mouse blood on your hands.

There are various methods of getting rid of a mouse. One is the glue trap, which is quite easy to use. But what do you do when you’ve caught the rat, but it’s still alive? How do you dispose of it? These are important questions that we worry about. It’s quite easy to dispose of a live mouse caught in a trap. Read the article and follow the instructions carefully.

How to Dispose of Old Toilets

How to Dispose of Smoke Detectors